As the largest Bingo venue in Europe they consistently bring in big numbers for their special big ticket events. They came to us wanting to make their biggest jackpot event even bigger. They required branding, design and and a digital campaign that ran parallel to outdoor and offline. 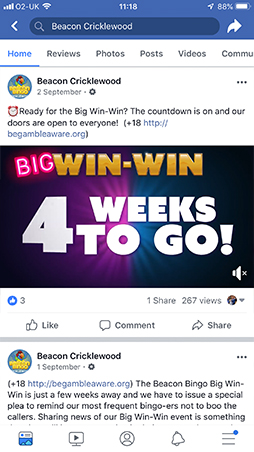 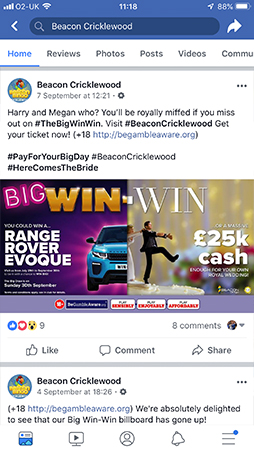 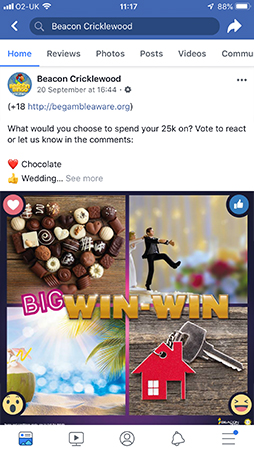 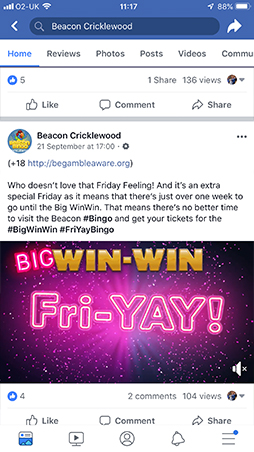 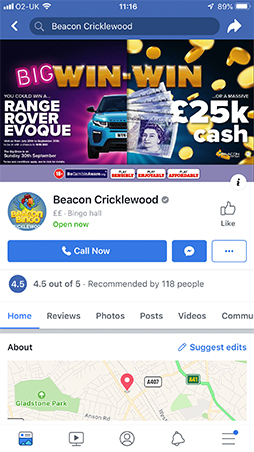 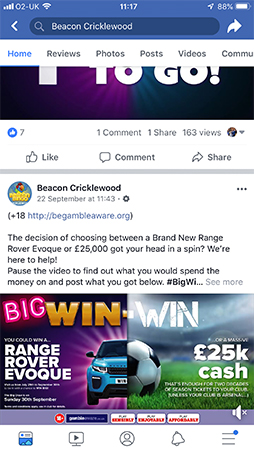 We were up against stiff competition in the pitching process but our creative ideas and realistically thought-out strategic direction shone through. We created a concept that was more overtly aspirational than anything Beacon had done before and we wrapped it up in a way that allowed us to really tailor the content so it speaks to a whole range of people within Beacons’ very broad demographics.

The design was a bit of a no-brainer. The events jackpot was a choice between a Brand New Range Rover Evoque or £25k in cash (whatever you choose, you’re winning, it’s a win-win…) and whilst historically people had tended to go for the money we still wanted to paint it as a decision that needed pondering.

This version of the ads was just the beginning though. The big idea was to have a rogue group of Bingo-playing regulars that are slightly miffed that Beacon is deciding to advertise the event quite so extensively and start  a Facebook group to bring down the event and stop it reaching as many people. They would try to achieve this by trolling the Beacon facebook page as well as vandalising in-venue advertisements with cheeky but still friendly messages, from smaller Table Talkers all the way up to giant Billboards… The group names themselves The GrandMa-fia and would act as a bridge  between the young and old. The things they get up to are quite tongue-in-cheek but ultimately what we wanted was a group that was as entertaining to the younger audience as it was empowering to older members.

We created two personas for the GrandMa-fia (that we would catfish as…), Phyllis Biggs – A no-nonsense older lady with a fierce competitiveness and a bit of a soft spot for old gangster movies, and Winnie Moore – A very cheeky Nan who tries to keep herself up to date with her grandkids, she’s also a very sore loser.

The hardest part of the project was organising and scheduling the work in to the studio. No one thing was overly complicated but there was a lot of assets that needed creating, proofing then artworking. We kept on top of it though and had just about everything completed about two months prior to the actual event taking place, we’re a very well oiled machine here. The only thing that nearly tripped us up was that about half way through the campaign, Beacon, who were seeing the success of the ads, decided to add another week’s worth of big prize events leading up to the Big Win-Win event itself. This needed a logo, ads, and printed materials, all in the same style as what we were already doing. No problem.

The GrandMa-fia has been earmarked as something that we can use going forward in a more expanded role.

Total Reach during Activity increased by around 300%

Over 23,000 Interactions on the Facebook page (including Likes, Comments, Shares)

Attendance at the event was increase by 21%

Tell us what you need.